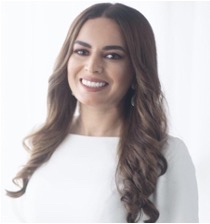 The Export Innovation Manager at Jordan Exports has been an international relations activist and innovator from an early age. Ayat Amr joined Jordan Exports to create groundbreaking export opportunities for Jordanian businesses through innovation, creativity, and disruptive practices.

A role model for Jordan youth, Ayat defines herself as a global citizen and an advocate for education as means of change for individuals and their communities. She dreams big and is not afraid of pursuing her dreams and helping others to achieve the same. Her unshakable optimism and focus, together with her brilliance, have already earned Ayat local and international awards and accolades:

The media have celebrated Ayat as “one to watch” for her accomplishments and positive influence on youth. She is a public speaker, a digital influencer, and a prolific volunteer; she volunteers with the UN, Dream Big Initiative, Arab Youth Podcast, and Amman Covid-19 response.

Ayat holds a bachelor’s degree in Computer Science from Hashemite University. In addition, she completed graduate certificates in Executive Education and Product Management from the Haas School of Business from the University of California–Berkeley and in Public Management and Social Innovation from Stanford University.

This site is registered on wpml.org as a development site.